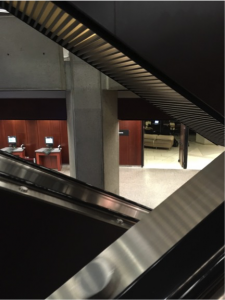 A view of the interior of Robarts Library, University of Toronto

NCC (the North American Coordinating Council on Japanese Library Resources) hosted a conference with the University of Toronto Libraries called Doing Digital Scholarship in Japanese Studies: Innovations and Challenges in mid-March. I was asked to give two short talks – one focusing on creating digital collections with students and partners, and one about using digital projects as a teaching tool in undergraduate learning.

Conference speakers included university librarians, faculty and CLIR postdoctoral fellows, describing their differing approaches to digital scholarship. Tokyo Metropolitan University professor Hidenori Watanave gave the keynote presentation, demonstrating a number of creative and interactive archive building projects he has been developing. Watanave’s projects group videos, photographs and data associated with people who experienced some of Japan’s most devastating disasters – the nuclear bombings of Hiroshima and Nagasaki and the battle of Okinawa in 1945, and the 2011 Eastern Japan Great Disasters. Visitors to Watanave’s archives can navigate maps to access the movement of people over time, watch video recordings of their stories or interact with other archival resources. Watanave is developing phone apps that use artificial reality (AR) to provide the same experience for visitors to these cities in real-time. Other digital scholarship sessions featured innovative map projects, local history work and a comprehensive scholarly image organization system. 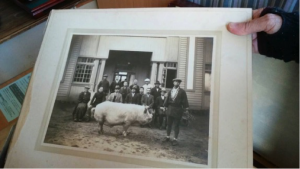 The hand of the archivist and one photograph of many in the archive in Japan.

I also visited Japan, where I negotiated the building of a digital archive. The project aims to digitize tens of thousands of objects, photos and documents collected over a 70-year period. The collection features evidence of the pervasive military culture in Japan in the 1930s, but also preserves documentation on local history and governance, folklore, religion and festivals, family life and economic change. The digitization project will commence July 2017.

Last, I attended the Coalition for Networked Information (CNI) conference held in Albuquerque. Concurrent with the CNI conference, I attended the Council on Library and Information Resources (CLIR) mid-year conference, which included targeted sessions for fellows on grant writing, project updates, career mentoring, and the creation of small group projects. Time spent reconnecting with others in the cohort fostered collaboration on various aspects of our postdoctoral projects.

My thanks to the Andrew W. Mellon Foundation, NCC and CLIR for providing generous support for these learning opportunities.