Ashley Zamichieli '19 reflects on her work with the Alan Justiss Project, a longitudinal text analysis of patterns in a corpus of works by the late Florida poet Alan Justiss. 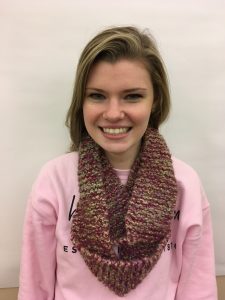 When embarking on the Alan Justiss Project, our team adopted the Meta Mindset Model early on to encourage excitement, creativity, and different perspectives. The Meta Mindset Model, which is being integrated into Lafayette’s learning process, is aimed to help students recognize the different stages of knowledge production in the creative process. The Alan Justiss Project team, which consists of faculty and students with interests ranging from art to psychology to neuroscience, utilizes the model to cohesively inspire and ignite innovation for a strong final analysis of Alan Justiss’s work as the project continues moving forward in the future.

In order to capture the complete digitization of the large collection, each team member began by selecting a single year to work with. By choosing just one year at a time, each team member can become familiar with the texts, and with the possible patterns to keep in mind when analyzing. Furthermore, the team tried to disperse the years we would initially be digitizing into a span that would capture a brief essence of the linguistic themes available in the 18-year span of poems in our possession. 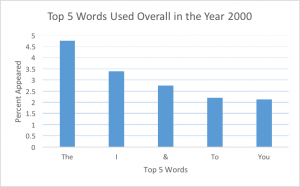 I began by digitizing poems from the year 2000. This year has relatively fewer poems than others: the digitization process concluded with a total of 294 poems. Although Justiss wrote heavily during the month of February, he seems to have gone on a hiatus between April 23rd to September 3rd. This hiatus could be due to a number of different life events happening to Justiss or could be attributed to the nature of the archive itself, which was gathered from various locations after the poet’s death and is therefore incomplete. I am working on the Alan Justiss Project as an independent study in Neuroscience. The knowledge I aim to get out of conducting analysis is to correlate how our brains process linguistic patterns, and how this translates onto paper. I try not to dwell on the nuances of why Justiss did or did not write, and rather focus on the content words he was using. Content words are words that convey information and meaning. Despite the importance of content words, they are not the words that appeared the most frequently in Justiss’ writing (see figure 1). Instead, the most common words observed were function words. Function words are words that are necessary for the grammatical structure of a sentence. After running this initial analysis, I relied on my mental notes to progress forward with the project. 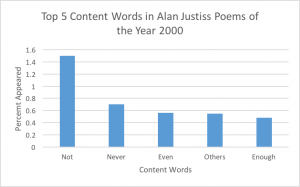 To separate any bias such as focusing on a particular month during one day of digitizing, I decided to keep only mental notes of the patterns I was recognizing, rather than a physical paper copy. I wanted to dive into my analysis with only patterns that stuck with me over the 2 months of solely digitizing. The one word that stuck with me was the word ‘dead.’ Using the software program Wordsmith, which searches for patterns in language by utilizing concordances, creating word lists, and summing up key words, I began by running a frequency analysis on the word ‘dead.’ A frequency analysis lets us see how many times a specific word appears in a text. Despite sticking out to me in my ‘mental notes,’ it actually only appeared 36 times, or .10% of all the words, in the year 2000. To compare the minute frequency of this word, I searched for the top five content words used in the year 2000 (see figure 2). 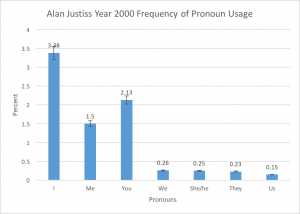 Aside from looking at content versus function words, throughout the course of the semester we have been reading and understanding different theories and explanations for the basis of linguistics and how these relate to our cognition. By taking in what other authors and researchers have found in texts, such as the use of pronouns and their underlying meaning in cognition, I hope to elaborate or find new patterns in the cognitive linguistic world. James Pennebaker, the creator of the LIWC software, published a book, The Secret Life of Pronouns: What Our Words Say About Us. Pennebaker wanted to quantify emotional states in regard to how writing helps some people but not others recover from mental illness. He found that depressed patients often use pronouns, such as I/me/my, which subconsciously connect to the personal responsibility patients feel about their actions. An improved state of one’s illness, noticed by Pennebaker, was a shift in pronoun usage, which includes the words we/she/they/us. In the year 2000, Justiss uses I/me/you more than we/they/us and based on the data along with Pennebaker’s conclusions Justiss may have been dealing with depression during this time (see figure 3).

My analysis, so far, has been preliminary. I have only been working on the year 2000 as a whole, but by the conclusion of the semester, I want to have compared individual months within the year 2000. My aim is to showcase Justiss’ most utilized linguistic themes such as metaphors and habitual patterns of language in order to build a framework for future analysis. To do this, I also want to expand my analysis to compare his writing tendencies at the start of his career, in 1992, with those at the end of it, in 2010. By doing this analysis I hope to reach a solid conclusion about trends within his writings and start forming a glimpse of how theses trends relate to how we process language in our brains.