Dilge Dilsiz '19 reflects on her work with the Alan Justiss Project, a longitudinal text analysis of patterns in a corpus of works by the late Florida poet Alan Justiss. 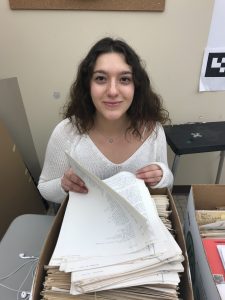 The Alan Justiss Project brings together faculty and students from various backgrounds and interests. The main goal of the project is to analyze the archive consisting of 13,000 machine typed poems written by Alan Justiss, and other ephemera.

An autobiographical statement by Alan Justiss

As an Art and Psychology double major, I was first brought into this project in the summer of 2017 as an EXCEL scholar for the arts department. My task was to scan the poems into image files to then produce searchable text files. As I scanned, I started to read more and more of Alan Justiss’s work and this led me to start searching about him. The curiosity of wanting to know if the poems were related to his life, related to what he has been through started to give me a different perspective on this project. Since he never published his work outside of a couple of chapbooks, there wasn’t much to find about him online. He was mentioned in couple of newspapers and websites, mostly local to Florida. The information I found wasn’t enough to answer my questions, so I started looking through other sources of information in the archive, such as letters and calendars. As I found out more, I started to connect the dots between his life and his poems. After the end of summer, I began working in the project as an independent study student, this time in the psychology department. 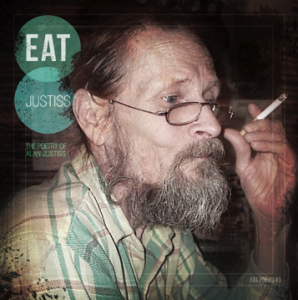 A photographic image of Alan Justiss from a periodical publication

All the team members got assigned to a different year of Justiss’s poems to convert the PDF files into text files and analyze the converted files. The main programs we use to do our analysis are LIWC, which is a computerized text analysis program that outputs the percentage of words in a given text that fall into one or more of over 80 linguistic (e.g., first-person singular pronouns, conjunctions), psychological (e.g., anger, achievement), and topical (e.g., leisure, money) categories, and WordSmith, which is a software program that creates concordances, finds key words and develops word lists to search patterns in the language. In addition to using these programs, I ended up deciding to bring my knowledge from the research I had done over the summer about Justiss’s personal life into my analysis. In those materials, I had learned about the many tragic events Alan Justiss had been through, including a fire that burnt down his house in the beginning of 2004. After discovering that there are poems in the archive that dates back to the time of this unfortunate event, I decided to use LIWC and WordSmith to understand the personal traits in his writing and the mood of the poet (by using linguistic patterns). Furthermore, the analysis would be helpful to examine the changes in the word usage before and after the incidence. My aim is to find out how life events affect linguistic patterns, and how personal experiences affect writing.

One thing I noticed is how Justiss started to use the word ‘fire’ after January 12, 2004 (which is the day of the fire). With this realization I decided to use Wordsmith to search the patterns in the language by looking at concordances, word lists, and the key words. After running analysis on the word ‘fire’ for the first 12 days of January and the rest of the month separately, the increase in the use of the word ‘fire’ was intense. The word only appeared once on January 1st and once on January 3rd, whereas it appeared 34 times (28 times on the week following the fire, 4 times on the week after and finally 2 times on the last week of January) after the date of the tragic event.

Similarly, after using LIWC to analyze the emotional states, the findings showed increase in the words related to negative emotions and decrease on the ones related to positive emotions (see figure below). 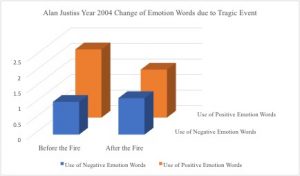 My final analysis for this independent study will be followed by the comparison of the change in the mood and word use over time to spot the recovery process from the tragic event. Furthermore, I am interested in analyzing the personal letter written by Justiss that describes the fire, to compare and focus on the patterns between the poems and the letter. I am curious to see if it would have similar results, or would the letter be more straight forward and clear about the emotional stage of the poet. With running more analysis on LIWC and WordSmith, I anticipate discovering strong correlations about the relation of true-life events and his poetry, and how personal background contributed to his writing.