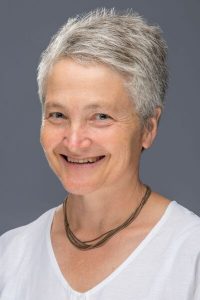 DSS will be welcoming Anne Kelly Knowles, McBride Professor of History at the University of Maine, for a day-long visit to campus on Friday, September 21st. Professor Knowles has been a leader in the use of geographic information systems in historical research and has broad expertise in historical geography, data visualization and the digital humanities. 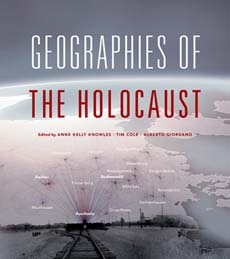 Cover of Knowles’ book, Geographies of the Holocaust

“All my research, and much of my teaching,” she writes, “uses geovisualization to reveal the invisible patterns of human action and change over time. GIS in particular has enabled me to recreate what Lee could see – and what he could not see – at the battle of Gettysburg. In Mastering Iron: The Struggle to Modernize an American Iron Industry (2013), I used GIS to explain why Americans lagged so far behind the British in developing a large-scale iron industry in the 19th century. Since 2007, I’ve worked with the Holocaust Geographies Collaborative, a group of historians and geographers, exploring how geovisualization can expand our understanding of the Holocaust. Our book Geographies of the Holocaust (2014) used GIS and cartography to visualize the many scales at which the Holocaust was implemented by the Nazis and their allies.”[1]

In addition to her own research, she edited two authoritative volumes featuring some of the foundational works in this interdisciplinary approach to historical research, both published by ESRI Press: Past Time, Past Place: GIS for History (2002); and Placing History: How Maps, Spatial Data, and GIS Are Changing Historical Scholarship (2008).[2]

There will be two opportunities to see her speak on Friday, September 21st:

An informal review of recent scholarly work using historical GIS and geo-visualization methods with a Q & A to follow. Lunch will be provided on a first-come first-served basis.

In this lecture, Knowles will explain the central role of mapping and other kinds of data visualization in the work of Holocaust Geographies Collaborative. She will present key findings and goals in her own research, including a new project on the historical geography of Jewish ghettos in Eastern Europe.